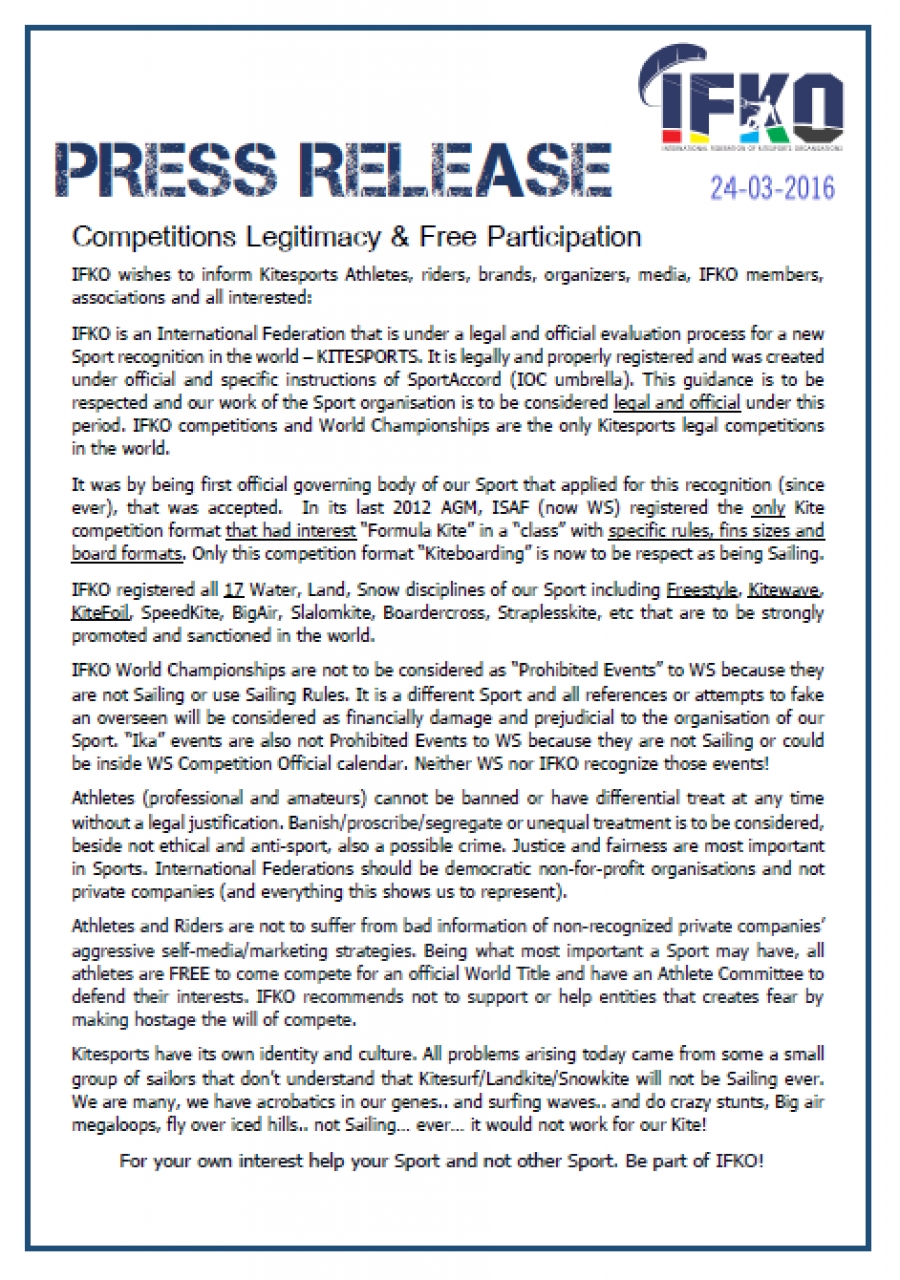 IFKO is an International Federation that is under a legal and official evaluation process for a new Sport recognition in the world – KITESPORTS. It is legally and properly registered and was created under official and specific instructions of SportAccord (IOC umbrella). This guidance is to be respected and our work of the Sport organisation is to be considered legal and official under this period. IFKO competitions and World Championships are the only Kitesports legal competitions in the world.

It was by being first official governing body of our Sport that applied for this recognition (since ever), that was accepted. In its last 2012 AGM, ISAF (now WS) registered the only Kite competition format that had interest “Formula Kite” in a “class” with specific rules, fins sizes and board formats. Only this competition format “Kiteboarding” is now to be respect as being Sailing.

IFKO registered all 17 Water, Land, Snow disciplines of our Sport including Freestyle, Kitewave, KiteFoil, SpeedKite, BigAir, Slalomkite, Boardercross, Straplesskite, etc that are to be strongly promoted and sanctioned in the world.

Athletes (professional and amateurs) cannot be banned or have differential treat at any time without a legal justification. Banish/proscribe/segregate or unequal treatment is to be considered, beside not ethical and anti-sport, also a possible crime. Justice and fairness are most important in Sports. International Federations should be democratic non-for-profit organisations and not private companies (and everything this shows us to represent).

Athletes and Riders are not to suffer from bad information of non-recognized private companies’ aggressive self-media/marketing strategies. Being what most important a Sport may have, all athletes are FREE to come compete for an official World Title and have an Athlete Committee to defend their interests. IFKO recommends not to support or help entities that creates fear by making hostage the will of compete.

Kitesports have its own identity and culture. All problems arising today came from some a small group of sailors that don’t understand that Kitesurf/Landkite/Snowkite will not be Sailing ever. We are many, we have acrobatics in our genes.. and surfing waves.. and do crazy stunts, Big air megaloops, fly over iced hills.. not Sailing… ever… it would not work for our Kite!

For your own interest help your Sport and not other Sport. Be part of IFKO!